Also spelled Chi Kung, QiGong is one of the four components of Chinese medicine along with acupuncture, herbal remedies, and massage.  QI is the Chinese name for Life-Fource energy, and Gong means, to practice.  So Qi Gong is simply the practice of accumulating, cultivating circulating and storing Qi.   It is  centuries old and originated when Bodhidharma came to China and encountered the monks of the Shaolin Temple.  The monks were spiritually enlightened but their bodies were weak and frail. So he taught them a series of exercises called the Yi JIn JIng to strengthen their muscles and tendons.  This became the precursor to all Qigong and the martial arts.

Qi Gong was secretive and not taught to non-Chinese until the 1970s.  I have been practicing Qigong for more than 20 years and have studied with Don Ahn, Song Arun, Malik, Larry C. Michael Winn, Minka de Vos, Dr. Roger Jahnke O.M.D. and Robert Peng.

I teach the Tao Yin,  Five Treasures, Eight Pieces of Brocade, Primordial Qi Gong, and Yi JIn JIng as well as other movements that are not part of forms.,

And I am now honored to be able to pass it on to you since Master Song Arun suggested that I teach.

Learn This Beautiful Movement In Our Qigong Classes 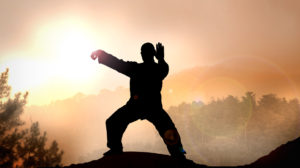 Qigong's gentle slowly performed movements are coordinated with your natural breathing patterns which stimulates and increases the flow of your Qi. (our life-force energy that circulates throughout our bodies from birth to death). The practice of Qigong also quiets the thinking mind and becomes a moving meditation perfect for people who find it difficult to remain seated and still while meditating. It is quite easy to learn and requires little space and not much time to be integrated into your wellness practice. Join me at my Qigong classes and learn how you can improve physical problems, and to remain limber, flexible and pain free.

Feel free to contact me about further information. I look forward to meeting with you.